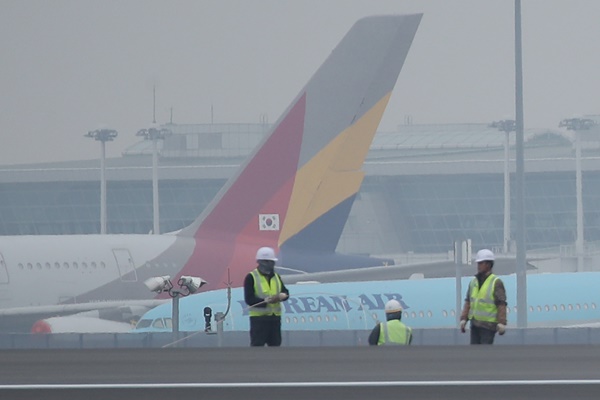 Hanjin KAL, the holding firm of the nation’s largest airliner Korean Air, has picked up speed in its efforts to take over Asiana Airlines by signing a deal with Korea Development Bank(KDB), the main creditor of the domestic rival carrier.

According to the companies, Hanjin KAL and KDB signed an 800 billion won investment agreement on Tuesday. Under the deal, the state-run bank will provide Hanjin KAL with ammunition needed for new share issuance through a third-party allotment and acquiring convertible bonds from Asiana.

As the third-party allotment is estimated to give over a 10 percent stake in the holding company to KDB, the agreement also stipulates seven obligatory clauses for Hanjin KAL to follow, including advance discussions and consent on selections of outside directors and auditors and other major management decisions.

To follow through with the take-over scheme, which is expected to be finalized by June next year, Korean Air also plans to increase its capital by two-point-five trillion won and to spend one-point-eight trillion won of it to buy Asiana’s shares and bonds.